First day of the new season's Quest was somewhat lucky for me. I don't think, I am an excellent player of Splinterlands game, but won all five battles today without loosing a single one, so I was lucky.

I had to win 5 battles with Dragon Splinter, and I love this splinter, because I can use any splinter's monsters plus Dragon monsters with the Dragon Summoners.

In the first battle, one of the rule was Little League, means, only monsters with 4 or less mana cost could be used. Overall mana wasn't much as well, only 17. 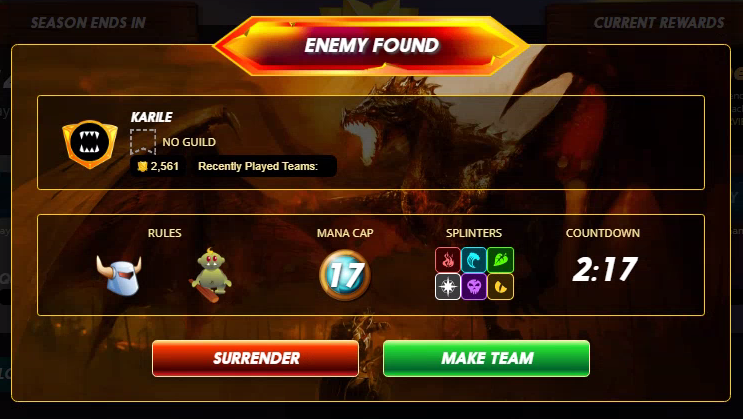 I used MANTICORE at the first position because it has more life than any other one, in order to give other monsters enough time to do maximum damage to opponent's monsters.

On second position, FURIOUS CHICKEN, to gain some more time for the rest of the monsters. On third, LIGHT ELEMENTAL, a magic attack monster. On fourth, DIVINE HEALER, for its Tank Heal ability and finally, The HALFLING ALCHIMST, the most useful monster in the low mana, and it played a big part in my win.

Watch rest of my battles in the video. I would love to hear your suggestions to improve my strategies and my game.

Rewards of the Day

Rewards of the day if not are mouth watering then do fall in the GOOD category. mobi72 has no more videos yet.

China Is The New Center Of Blockchain
blocktvnews
10 views a year ago $
08:45

Monkeys on the hunt for food at Kingsway hospital
joetunex
4 views 2 months ago $
09:59

What the Hell is Wrong with You Americans?
davidpakman
1 views 4 months ago $
00:45